Time to bring you up-to-date on the latest HB 6 repeal efforts. Increasingly, Republicans are jumping on the bandwagon to repeal the law, but not for the reasons you might think. Anyone with a brain recognizes that HB was nothing more than a $1.5 bill transfer of wealth to FirstEnergy and the hedge funds and merchant banks that bought the old FirstEnergy Solutions and turned it into Energy Harbor. In order to bring the other utilities along, HB 6 included funding to subsidize two 1950s vintage coal plants, know as the OVEC plants, and four utility-scale solar farms – the lipstick on the pig. Another provision known as decoupling guaranteed FirstEnergy profits at the 2018 level, an abnormally high-profit year because of the weather, roughly $221 million in 2020. 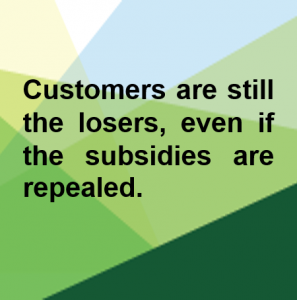 The General Assembly dithered through 2020, expressing shock and outrage but holding out for the nuclear and OVEC subsidies in particular. Meetings by a select committee last fall went nowhere.

Fast forward to today. Attorney General Dave Yost managed to get courts to stay the decoupling provisions, stopping the recovery of the funds from customers after one month. Soon thereafter, the City Attorney in Columbus and other local government lawyers manage to block the recovery of the nuclear subsidy.

Then Energy Harbor announced that it would not seek to collect the nuclear bailout, in part because FERC is taking actions that would essentially negate the subsidies by forcing the Company to bid the nuclear plants into the market at high prices, which meant no one would buy the power. The subsidies only applied to sales from the nuclear plants, so no sales means no payments. [See FERC article.]

FirstEnergy followed with an announcement that it would forego the decoupling funds. That freed up a number of legislators to stop defending HB 6 and set up a scenario where the bill can be repealed, at least in part.

As it looks right now, the General Assembly will likely repeal the nuclear bailout and the decoupling provisions. The bill have passed the House to do so and are pending in the Senate. The OVEC subsidy is still up in the air. The PUCO has been authorizing subsidies for those ancient coal plants for years, and probably will continue to do so unless the General Assembly forbids it. The solar subsidies are rarely mentioned.

Customers are still the losers, even if the subsidies are repealed. In order to pay for the subsidies, the General Assembly cancelled the energy efficiency and renewable energy standards. The EE standards have cut energy use in Ohio by 19.4%, exceeding the 17.5% target. Only Ohio would eliminate successful utility programs that are saving customers money.

The EE programs also included funding for AEP and DP&L’s low-income programs, both of which have been terminated.

The majority of the General Assembly still views promoting energy efficiency and renewable energy as creeping socialism. It will take a while to change those attitudes. Anti-wind and solar activism still exist out in the rural areas where these facilities are built. There is a bill in the legislature to allow local referendums on whether to permit a wind or solar farm to be sited in a township. This checkerboard approach could doom expansion of an industry that promises to bring well over $2 billion in investment to rural Ohio over the next several years.

Ohio has closed more than 17,000 Megawatts of coal-fired powerplants in the last decade. We need to replace that generation. The cheapest options are wind and solar. If the General Assembly cares about our wallets, it should be tearing down barriers to the deployment of clean technologies, not building new ones.